How the Bretton Woods system changed the world 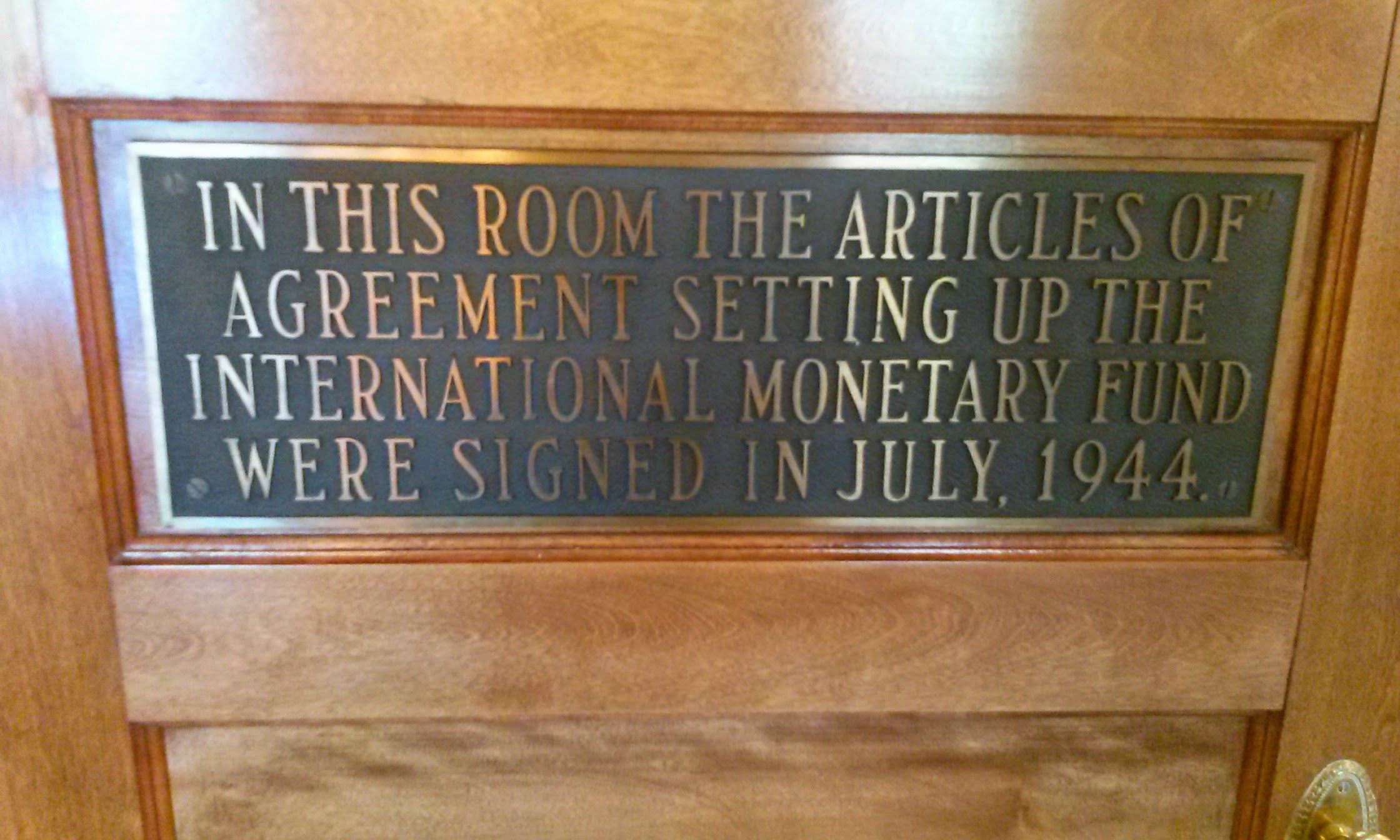 The roughly three decades that coincided with the monetary arrangements of the Bretton Woods system are often seen as a time of relative stability, order, and discipline. However, considering that it took almost 15 years after the 1944 Bretton Woods conference before the system was fully operational and that there were signs of instability throughout the era, perhaps not enough emphasis has been put on in the relative difficulty of trying to maintain the system. Rather than viewing Bretton Woods as a period characterized by stability, it is more accurate to view it as a transitional stage that ushered in a new international monetary order that we still live with today.

In July 1944, delegates from 44 allied nations met at a mountain resort in Bretton Woods, NH, to discuss a new international monetary order. The hope was to create a system to facilitate international trade while protecting the autonomous political goals of individual nations. It was intended to be a superior alternative to the interwar monetary order that possibly led to both the Great Depression and World War II.

The discussions were largely dominated by the interests of the two great economic superpowers of the time, the United States and Great Britain. But these two countries were far from united in their interests, with Britain emerging from the war as a major debtor nation and the United States ready to take on the role of the world’s great creditor. Wanting to open the world market to its exports, the US position, represented by Harry Dexter White, prioritized the facilitation of freer trade through the stability of fixed exchange rates. Britain, represented by John Maynard Keynes and wishing the freedom to pursue autonomous political goals, pushed for greater exchange rate flexibility to improve balance of payments problems.

Rules of the new system

Finally, a compromise of fixed but adjustable rates was reached. Member countries would peg their currencies to the US dollar and, to assure the rest of the world that their currency was reliable, the United States would peg the dollar to gold, at a price of $ 35 an ounce. Member countries would buy or sell dollars to stay within a band of 1% of the fixed rate and could adjust this rate only in the case of a “fundamental imbalance” in the balance of payments.

To ensure compliance with the new rules, two international institutions were created: the International Monetary Fund (IMF) and the International Bank for Reconstruction and Development (IBRD; later known as the World Bank). The new rules were officially described in the Articles of Agreement of the IMF. Other provisions of the articles stipulated that current account restrictions would be lifted while capital controls were allowed, in order to avoid destabilization of capital flows.

What the Articles did not provide, however, were effective sanctions on countries with chronic balance of payments surpluses, a concise definition of “fundamental imbalance” and a new international currency (a Keynes proposal) to increase the supply of gold. as an extra. source of liquidity. Furthermore, there was no definitive timeline for implementing the new rules, so it would be about 15 years before the Bretton Woods system was actually fully operational. At that time, the system was already showing signs of instability.

The early years of Bretton Woods

While the US lobbied for immediate implementation of the provisions of the Articles, poor economic conditions in much of the postwar world made it difficult to solve balance of payments problems under a fixed exchange rate regime without some exchange controls for current account and external sources of financing. Without an international currency created to provide supplemental liquidity, and given the limited lending capabilities of the IMF and IBRD, it soon became clear that the United States would have to provide this external source of financing to the rest of the world while allowing the gradual implementation of current account convertibility.

From 1946 to 1949, the United States had an average annual balance of payments surplus of $ 2 billion. In contrast, in 1947, European nations suffered from chronic balance-of-payments deficits, which resulted in the rapid depletion of their reserves of dollars and gold. Rather than view this situation as advantageous, the US government realized that it seriously threatened Europe’s ability to be a continuous and vital market for US exports.

In this context, the United States administered $ 13 billion of financing to Europe through the Marshall Plan in 1948, and some two dozen countries, following Britain’s example, were allowed to devalue their currencies against the dollar in 1949. These moves helped ease the dollar shortage and reestablished competitive equilibrium by reducing America’s trade surplus.

The Marshall Plan and more competitive exchange rates eased much of the pressure on European nations trying to revive their war-torn economies, allowing them to experience rapid growth and restore their competitiveness vis-à-vis the United States. Exchange controls were lifted gradually. with full current account convertibility finally achieved at the end of 1958. However, during this time the expansionary US monetary policy that increased the supply of dollars, together with greater competitiveness from other member nations, soon reversed the balance of payments situation. . The United States had balance of payments deficits in the 1950s and had a current account deficit in 1959.

The depletion of US gold reserves that accompanies these deficits, while still modest due to the desire of other nations to keep some of their reserves in dollar-denominated assets rather than gold, increasingly threatens the stability of the system. With America’s current account surplus disappearing in 1959 and the Federal Reserve’s external liabilities first exceeding its monetary gold reserves in 1960, this raised fears of a possible run in the nation’s gold supply.

Since the dollar claims on gold exceeded the actual gold supply, there were concerns that the official gold parity rate of $ 35 an ounce would now overvalue the dollar. The United States feared that the situation could create an arbitrage opportunity whereby member nations would exchange their dollar assets for gold at the official parity rate and then sell gold on the London market at a higher rate, depleting the assets. US gold reserves and would threaten one of the countries. hallmarks of the Bretton Woods system.

But while member countries had individual incentives to take advantage of that arbitrage opportunity, they also had a collective interest in preserving the system. What they feared, however, was that the United States would devalue the dollar, making its dollar assets less valuable. To allay these concerns, presidential candidate John F. Kennedy was forced to issue a statement in late 1960 that if elected he would not attempt to devalue the dollar.

In the absence of a devaluation, the United States needed a concerted effort by other nations to revalue its own currencies. Despite calls for a coordinated revaluation to restore the balance of the system, member countries were reluctant to revalue, not wanting to lose their own competitive advantage. Instead, other measures were implemented, including an expansion of the IMF’s creditworthiness in 1961 and the formation of the Gold Pool by several European nations.

The Gold Pool pooled the gold reserves of various European nations to prevent the market price of gold from rising significantly above the official ratio. Between 1962 and 1965, new supplies from South Africa and the Soviet Union were sufficient to offset the growing demand for gold, any optimism soon deteriorated once demand began to exceed supply from 1966 to 1968. Following France’s decision to leaving the Pool in 1967, the Pool collapsed the following year when the market price of gold in London soared away from the official price.

The collapse of the Bretton Woods system

Another attempt to rescue the system came with the introduction of an international currency, like the one Keynes had proposed in the 1940s. It would be issued by the IMF and would take the place of the dollar as the international reserve currency. But as serious discussions about this new currency – under the name Special Drawing Rights (SDR) – only began in 1964, and the first issue did not occur until 1970, the remedy turned out to be too little, too late.

At the time of the first SDR issuance, the total US foreign liabilities was four times the amount of US gold monetary reserves. And despite a brief surplus in the merchandise trade balance in 1968-1969, the return to deficit thereafter was enough pressure to initiate a run on US gold reserves. With France leaking its intentions to exchange its dollar assets for gold and Britain requesting to exchange $ 750 million for gold in the summer of 1971, President Richard Nixon closed the gold window.

In a final attempt to keep the system alive, negotiations took place in the second half of 1971 that led to the Smithsonian Agreement, whereby the United States agreed to devalue the dollar against gold by approximately 8.5 percent to $ 38 per ounce. and other countries offered to revalue their currencies relative to the dollar. But despite these revaluations, in 1973 there was another run on the dollar, which generated inflationary capital flows from the United States to the Group of Ten. Parities were suspended, allowing currencies to float and definitively ending the Bretton Woods system of fixed but adjustable rates.

Far from being a period of international cooperation and global order, the years of the Bretton Woods agreement revealed the inherent difficulties of trying to create and maintain an international order that would pursue free and unimpeded trade while at the same time allowing nations to pursue goals. autonomous politicians. The discipline of a gold standard and fixed exchange rates proved to be too much for fast-growing economies with different levels of competitiveness. With the demonetization of gold and the move to floating currencies, the Bretton Woods era must be seen as a transition stage from a more disciplinary international monetary order to one with significantly greater flexibility.