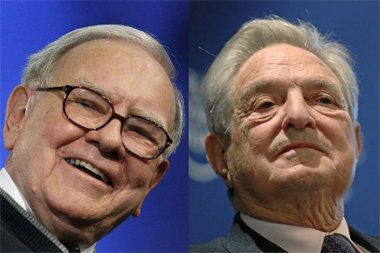 Legendary investment gurus Warren Buffett and George Soros are two of the most famous and successful Wall Street figures in history. While the two men have irrefutably risen to prominence in the financial arena, the paths they took to get there are largely divergent. This article describes each of their unique stories.

Warren Buffett made his first investment at age 11. At age 20, he studied at Columbia University under the tutelage of his personal mentor, Benjamin Graham, who is widely known as the father of value investing. Graham argued that each security had an intrinsic value that was independent of its market price. This concept eventually became the fundamental investment philosophy of Buffett’s first fund, Buffett Partnership, Ltd., which he launched in 1956 with an initial investment of $ 105,100.

Over the next 13 years, this fund soared to more than $ 105 million in assets. Buffett eventually built on this success to create Berkshire Hathaway, a holding company for a multitude of businesses. As of July 18, 2021, it is worth more than $ 635 billion, where each individual share is valued at a surprisingly high $ 417,601, primarily because Buffett refuses to do a stock split on the shares owned by his company. .

As a value investor, Buffett is constantly looking for investment opportunities through which he can exploit price imbalances over a long time horizon. And as an arbitrageur, Buffett has been known to instruct his followers to “be afraid when others are greedy and to be greedy when others are afraid.” Much of its success can be traced back to Graham’s three fundamental rules:

Using these three principles, Warren Buffett has been able to make rational investment decisions in the face of economic fluctuations.

Born in Budapest in 1930, financial titan George Soros survived Nazi-German-occupied Hungary and emigrated to the United Kingdom in 1947. Years later, after graduating from the London School of Economics, Soros began his professional career working for various merchant banks in the United Kingdom and the United States before launching his first hedge fund, Double Eagle, in 1969.

With the proceeds of this effort, Soros was able to seed his follow-up hedge fund, Soros Fund Management, in 1970. Since it was renamed the Quantum Fund, it operated from 1973 to 2011, during which time it returned approximately 20% to investors. annually. .

According to Soros, it closed the fund mainly due to overly strict Securities and Exchange Commission registration requirements. But Soros continues to play an active role in managing Soros Fund Management, a later hedge fund that he founded.

Both Soros and Buffett are notable philanthropists, with Soros donating more than $ 32 billion to various causes, and Buffett promising to donate 99% of his fortune to charities..

Unlike Buffett, who bases his investments on the intrinsic value of a company, Soros relies on short-term volatility and highly leveraged transactions. In short, Soros is a speculator who gives little thought to the fundamentals of a company. For example, in the early 1990s, you made a multi-billion dollar bet that the British pound would depreciate significantly in value over the course of a single trading day.

In essence, Soros was fighting directly against the British central banking system in its attempt to keep the pound artificially competitive in the currency markets. Soros pocketed $ 1 billion from the deal, earning him the nickname: “The Man Who Broke the Bank of England.”

Warren Buffett and George Soros will always be regarded as two of the most brilliant investment minds in the world. While employing radically different investment strategies, both men have achieved great success in their own disciplines.

www.investopedia.com
READ ALSO:  Definition of a fixed rate mortgage
About the author