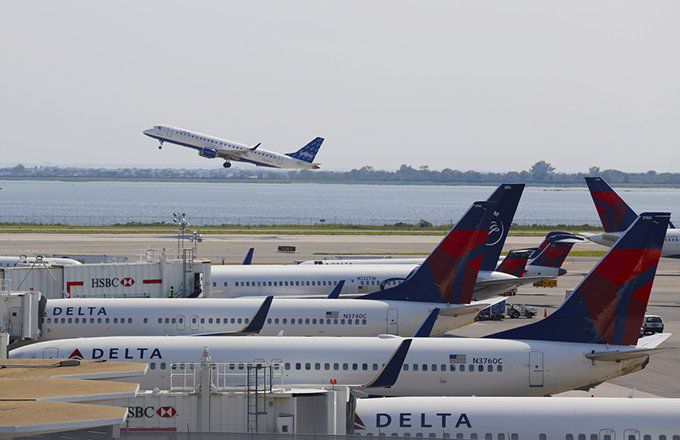 As one of the world’s largest airlines, Delta Air Lines faces competitive challenges and threats that can affect its performance and profitability. Investors interested in looking at the company as a potential investment can perform a fundamental analysis that helps them get a clear picture of Delta’s financial health and position within the airline industry. This information leads to better investment decisions, as stock price appreciation tends to follow strong fundamentals. Fundamental analysis begins with examining a company’s financial documents, such as its financial statements, annual and quarterly reports, and stock performance.

However, the most astute investors will go beyond looking at Delta’s financial position and study the potential effects of external forces on the health of the company. One of the most effective tools for this is Porter’s Five Forces.

Porter’s Five Forces is an analytical framework developed in 1979 by Harvard Business School professor Michael E. Porter. Porter’s goal was to develop a comprehensive system for assessing a company’s position within its industry and considering the types of horizontal and vertical threats the company might face in the future.

A horizontal threat is a competitive threat, such as customers switching to a substitute product or service, or a new company entering the market and taking market share. A vertical threat is a threat along the supply chain, such as buyers or suppliers gaining bargaining power, which can put a company at a competitive disadvantage.

The Five Forces model assesses three potential horizontal threats and two vertical threats. Industry competition, the threat of new entrants, and the threat of substitutes represent the horizontal threats. Vertical threats come from the greater bargaining power of suppliers and the greater bargaining power of buyers. Using the Five Forces framework, investors can determine the most viable threats to a business. With this information, they can assess whether the company has the resources and the protocol to respond to potential challenges.

READ ALSO:  What are the three main economic components necessary for stagflation to occur?

An overview of Delta Air Lines

Delta Air Lines, Inc. (DAL) is the oldest airline still operating in the United States. The company was founded in 1928 and is based in Atlanta, Georgia. From April 2020 to December 2021, Delta ranked third in domestic market share for US airlines with 14.4%. Delta’s size and status as a longtime leader in the airline industry have helped ensure its continued success. In July 2021, the company’s market capitalization was around $ 27.6 billion.

The level of competition in the airline industry is high. The big airlines essentially fly to the same places from the same airports for roughly the same prices. The amenities, or lack of amenities, they offer are similar, and coach-class seats are just as tight no matter which airline you choose. Delta’s traditional rivals include United and American, but the company also faces stiff competition from the growing popularity of value airlines, most notably Southwest, but also JetBlue and Spirit.

The number of passengers that Delta Air Lines carried in 2020.

Because the air travel experience for customers is remarkably similar no matter which airline they take, airlines are constantly threatened by the possibility of losing passengers to the competition. Delta is no exception. If a customer plans to book a flight from Houston to Phoenix on Delta but a third-party price aggregator, such as Priceline, reveals a better deal from United, the customer can make the switch with a simple mouse click. Delta manages these competitive threats with extensive marketing campaigns that focus on the company’s longstanding reputation and brand awareness.

The bargaining power of buyers

Buyers have immense bargaining power over airlines because the cost and effort required to switch from one airline to another is minimal. The rise and popularity of third-party travel booking websites and smartphone apps exacerbates this problem for airlines. Most travelers don’t contact an airline, like Delta, directly to book a flight. They access sites or applications that compare rates between all operators, enter their travel itineraries, and then choose the least expensive offer that suits their schedules.

Delta can respond to this market force by conducting market research and offering more direct flights at lower prices to the destinations most frequently searched by travelers on third-party platforms. In addition, the company should strengthen relationships with credit card companies and strive to offer the best reward programs; Customers are reluctant to switch carriers when they have accumulated what they consider “free” miles with a particular airline.

The threat of new entrants

Potential new entrants to the market pose minimal threat to Delta. The barriers to entry in the airline industry are remarkably high. The operating costs are enormous and the government regulations that a business must follow are numerous and extremely complex. There is not a single airline founded during the 21st century that has even a 2% market share. JetBlue, founded in 1998, represents the newest airline to make a dent in the industry, and the company’s market share is still less than one-third that of Delta.

The power of provider’s negociation

The list of airline providers is quite long. However, the list of airlines that providers can sell to is short. This asymmetry places the bargaining power directly in the hands of the airlines. Bargaining power is particularly strong for Delta, given its position as the world’s largest airline by passenger revenue in 2019. Simply put, Delta’s suppliers have a strong incentive to keep the relationship on good terms. Delta will likely be able to find a replacement provider without problems if the relationship doesn’t work. On the contrary, the supplier is unlikely to find another buyer capable of replacing the sales volume represented by Delta.

A surrogate, as defined by the Five Forces model, is not a product or service that directly competes with the company’s offerings, but rather acts as a surrogate for the business. Therefore, a United flight from New York to Los Angeles is not considered a substitute for a Delta flight with the same start and end points. Examples of substitutes are taking the train, car, or bus ride. Unless a trip is very short, such as traveling from Los Angeles to Las Vegas, there are no travel fare methods as viable substitutes for air travel. From New York to Los Angeles is a 6.5 hour flight. The journey takes 41 hours by car or bus, and a train can’t get there much faster. Until new technology emerges to replace air travel as the fastest and most convenient way to travel long distances, Delta faces few threats from substitute travel methods.